On December 18, 2013, the Campaign to Free Lorenzo Johnson protested the PA Attorney General’s false prosecution of Lorenzo and delivered petitions demanding dismissal of the charges and immediate freedom for Lorenzo. Over 1,000 petition signatures and letters were 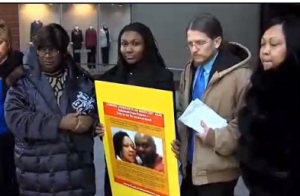 delivered to the Attorney General of Pennsylvania, Kathleen Kane, after new evidence of Johnson’s innocence surfaced – including his presence in New York City at the time of the Harrisburg murder, the identity of the actual killers, as well as police and prosecutorial misconduct.

Tazza, Lorenzo’s wife, declared: “1,000 signatures means we are not in this alone…I won’t stop until he’s home. There is nothing and no one that can stop me from fighting for what’s right.”

Also speaking at the event were Jeffrey Deskovic, an exoneree himself and founder of the Deskovic Foundation for Justice; William Lopez, New York Exoneree; Bret Grote, Esq., Executive Director of the Abolitionist Law Center; and Rachel Wolkenstein, an attorney working with the Campaign.

Jeffrey Deskovic, who spent 16 years in prison in New York for a rape and murder he did not commit before being cleared by DNA evidence, set up a foundation to help other innocent people. He drove Lorenzo Johnson back to prison after the US Supreme Court reinstated his murder conviction. Deskovic said, “It was the hardest thing I’ve ever had to do since being released, to turn somebody back to prison. It was a very emotional and difficult journey on the way there…. As we were rotating drivers, he [Lorenzo] said, you know, look how crazy this is, I’m driving myself back to prison to resume a life sentence without parole for a crime I’m innocent of.”

Deskovic also announced the launch of a confidential tip line (917 929-2964) to receive information that could lead to additional new evidence.

This action was covered by network ABC-TV, and broadcast in Harrisburg, PA and in NYC as well.  The Associated Press release, titled, “Allies of briefly freed Pa. inmate seek dismissal,” was printed in dozens of newspapers coast to coast, including The Washington Post and SF Chronicle. It was filmed by political videographer Lamar Williams and covered on the Innocence Project Blog.

This press conference and delivery of petitions compelled a response from the Attorney General, making her aware that there is a growing international campaign fighting for Lorenzo and his immediate freedom.

Speaking to the Associated Press on Wednesday, spokesperson for the Attorney General, Joe Peters, said, “Obviously, the Supreme Court accepted our argument. However, Attorney General Kane is always interested, in every case, in justice. If there is new evidence or information, we are interested in that.” They also announced they are meeting with Lorenzo Johnson’s lawyers on January 15, 2014.

Contrary to Peters’ statement, however, the Attorney General’s office has already opposed hearing Lorenzo Johnson’s new evidence and won the denial of Lorenzo Johnson’s Motion to File a Second Writ of Habeas Corpus in the federal court. The Third Circuit adopted Attorney General Kane’s outrageous assertion that Johnson had not made out a prima facie claim for relief.

We need to increase the number of people who sign Lorenzo’s Freedom Petition, write letters, and help publicize his case. To see what you can do today, check out “How Can I Help?”